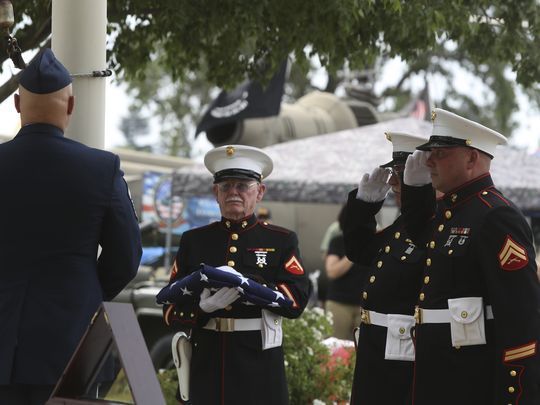 Sixty-eight-year-old Dennis Ellis of Redding was deep in thought Tuesday as he sadly gazed upon a large poster displaying the names and photos of those 46 Shasta County residents killed in the Vietnam War.

Some of them were his classmates.

The 1967 Central Valley High School graduate enlisted in the the U.S. Army after getting his draft notice, serving on a helicopter gunship in Vietnam in 1969-70.

And, he said, he knows quite well how he managed to return home after his exceptionally dangerous tour of duty.

Ellis was one of hundreds who turned out Tuesday for a solemn Memorial Day observance hosted by the Shasta County Veterans Affiliated Council at the Veterans Memorial Grove near the Redding Convention Center.

Although most Memorial Day services were held on Monday, the veterans group always holds its observance on the traditional May 30 Memorial Day date.

Mike Dahl, a former Redding mayor and U.S. Marine Corps veteran who served two tours of duty in Vietnam, was its keynote speaker.

“Today, the traditional Memorial Day, is our annual tribute to honor and remember those who died while serving in our U.S. military,” he said. “Memorial Day is not a cheerful holiday or extended weekend. It is not a kick-off to summer. It is not about beer and barbecue. Today is a sacred and solemn time for reflection, commemoration and remembrance.”

It was also turned out to be a day to help pay tribute to a group of unsung war veterans who fought alongside their U.S. allies to fight communist forces during the brutal Vietnam War.

Dahl recognized local Lao, Mien and Hmong veterans and their families for the sacrifices they made.

Wan Chao and San Tern, both 64 and of Redding, were among those honored, saying they felt very proud to have done their part to help America.

Dahl said the Lao veterans were an army of "special guerilla units" recruited by the Central Intelligence Agency to fight with the U.S. forces against the communists by destroying supply lines used by the North Vietnamese army.

Chao, who said he's lived in Redding for more than 30 years, said he lost many family members during that terrible war.

The Memorial Day observance also paid special tribute to the families of the fallen and Gold Star Mothers, including Shirene Regelin, whose son, Chad, was killed in 2012 in Afghanistan.